Coming up soon... the Manhattan Project invites you to join us for two special events: 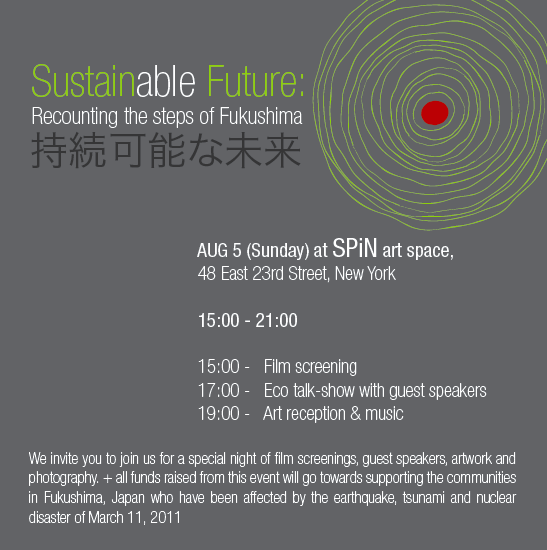 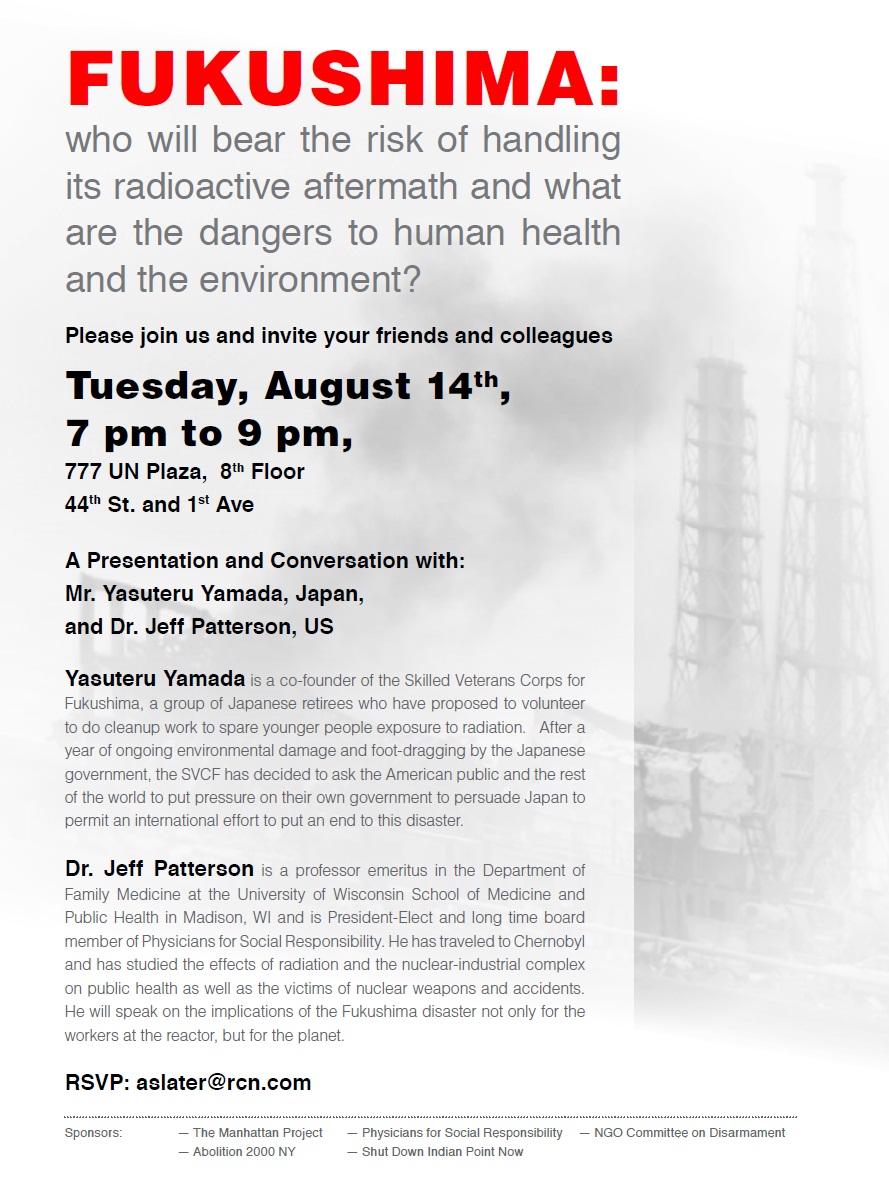 Posted by Manhattan Project at 11:55 AM No comments:

ACT NOW TO PROTECT the safe and clean air, water and soil of the, Japanese city of Kitakyushu and the island of Kyushu from further radioactive contamination.
SIGN BELOW TO STOP BURNING OF RADIOACTIVE DISASTER DEBRIS. Tell Kitakyushu Mayor Kenji Kitahashi to stop spreading radioactive particles into the Kitakyushu and Kyushu air, land and water.

HERE IS THE STORY:
Radioactive debris from the Great East Japan Earthquake of 2011 are being transported to the relatively clean island of Kyushu. Even though citizens protested, on May 22, 2012, Kitakyushu City in Fukuoka Prefecture started incinerating tsunami disaster-related debris from Miyagi and Iwate Prefectures to test the “safety” of the incineration in the city’s two incinerator plants.

We call for stopping further acceptance and incineration of more debris because neither the transport of such radioactive materials nor the burning of it is safe or sound public policy. Spreading radioactivity to “clean” areas is dangerous.
If such debris is incinerated, health threatening dangerous radioactive particles will be emitted into the atmosphere and around the world. Other radioactive particles will be in the incinerator ash. Even if the incinerator ash is only used for landfill, the radioactive cesium in the soil will eventually move to the ocean because it is soluble in water. Unless a plant or animal instead carries it into the wind and into someone’s lungs, or into food and into someone’s mouth.

After the Fukushima Dai-ichi disaster, Japanese government standards were changed to allow people to be exposed to much more radioactivity than was considered “safe” before the disaster. Before, industrial waste with radioactive cesium concentration of 100 becquerels per kilogram (Bq/kg) and higher had to be carefully handled and stored as “radioactive waste” only at designated facilities. Now, if radioactive cesium concentration in it is lower than or equal to 8,000 Bq/kg that debris can be used for landfill as regular waste. There is no scientific health data to justify this 80 times increase in allowable radiation.

An October 2011 IAEA report about findings on radioactive waste states: “Large volumes of contaminated material will be generated from massive clean-up activities in urban, agriculture, forest and aquatic areas that are affected mostly by radioactive cesium releases. The material would include soil, organic material, vehicles, buildings, road material, aqueous liquids, trees and stumps contaminated with Cs-134 and Cs-137. The radioactivity content of the contaminated material ranges from a few to several tens of thousands of Bq/kg.” It is hardly possible to measure accurate radioactive cesium concentration in debris to be transported to other parts of Japan, including Kitakyushu.

We should never leave a such a dangerous and long-lasting legacy to our offspring. We should stop spreading radioactive contamination and preserve the land, air, and water of Kyushu. We can help people who more directly suffered from the terrible disaster to recuperate in the “clean” environment of Kyushu.

Accordingly, we call for Kitakyushu Mayor Kenji KITAHASHI to :
1. Please stop accepting and incinerating the disaster-related debris immediately since its safety cannot be ensured.
2. Please support and reinforce measures to help the people of Tohoku (areas near Fukushima Dai-ichi with high radioactive contamination), such as continued admission of evacuees for respite and recuperation.

Posted by Manhattan Project at 9:04 PM No comments:

IN MORTAL HANDS, A Cautionary History of the Nuclear Age
by Stephanie Cooke 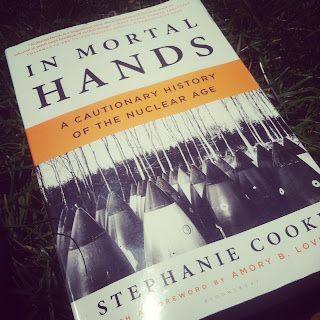 In this landmark history of the nuclear age, industry insider Stephanie Cooke draws on her unprecedented access to chart our evolving understanding - and frequent misunderstandings - of nuclear technology.  Nuclear weapons were once seen as the great hope for ending war forever; instead, they spurred a massive arms race now spreading to new countries. Nuclear reactors, once seen as a source of unlimited electricity and often advanced as a solution to global warming, provided cover for illicit nuclear trade, encouraged proliferation, and still pose many other untold dangers. A comprehensive chronicle told in human terms, In Mortal Hands sheds critical new light on the issues currently determining our planet's future.

The Manhattan Project hopes to invite author Stephanie Cooke to join us for an educational event and book signing in New York City this coming fall. Please join us in reading her book, which is available on Amazon.com

Posted by Manhattan Project at 10:34 AM No comments: Welcome to the new Manhattan Project !  We are a group of concerned citizens, artists, activists and specialists in New York City that invite you to join us in our mission to raise awareness and create peaceful actions towards eliminating all nuclear power and nuclear weapons through the arts and education.


to find out about our events, visit our blog and follow us on twitter  @info_manhattan
Posted by Manhattan Project at 8:12 PM No comments: